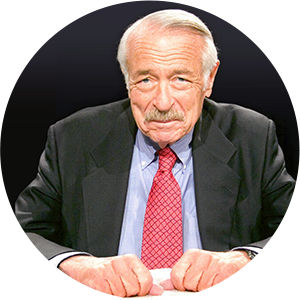 Richard D. Heffner was a University Professor of Communications and Public Policy at Rutgers, the State University of New Jersey, from 1984 to 2014. He commutes there from New York City, where he produces and hosts Richard Heffner’s Open Mind, his more than five decades-old, prize-winning television program seen each week on public stations via American Public Television’s broadcast satellite and now preserved as “living history” in this archive.

For twenty years Mr. Heffner commuted even further… to Hollywood, where from 1974 to 1994 he served as Chairman of the Board and Administrator of the motion picture industry’s voluntary film classification and rating system. He then donated a lengthy narrative of his Hollywood years to Columbia University’s distinguished Oral History Project, where it is available – along with his personal papers from this period – for study and research by authorized historians, journalists and other media scholars. Mr. Heffner has now extended this oral history to encompass his years in both public and commercial broadcasting and in academic life. His As They Saw It, derived from his broadcast conversations over fifty years, was published by Carroll & Graf both in hardcover and paperback editions. Additionally, Mr. Heffner’s collaboration entitled Conversations With Elie Wiesel was published by Random House’s Schocken Books.

Trained as an American historian, Mr. Heffner is also the author of A Documentary History of the United States (1952), which now appears in an Expanded and Updated Eighth Edition (“with” freelance journalist grandson Alexander Heffner), and the editor of Alexis de Tocqueville’s classic Democracy In America, both published by Penguin Putnam, widely used in schools and colleges, and available everywhere.

A Phi Beta Kappa honors graduate of Columbia (A.B., 1946; M.A., 1947), Mr. Heffner has taught history and political science at the University of California at Berkeley, Rutgers, Columbia, Sarah Lawrence, and the New School for Social Research. He holds honorary doctorates from the State University of New York and from Long Island University. In 2005, Columbia University’s Teachers College awarded him its Medal for Distinguished Service to Education.

In 1964, after a parallel career in the media, Mr. Heffner moved his academic focus from Americana to communications and public policy, continuing to write in both fields, with articles, book reviews and other commentary in such publications as The New York Times, the Los Angeles Times, The Washington Post, The Saturday Review, etc. His lectures and seminars – particularly overseas for the State Department in such countries as the former USSR, Israel, Germany, Greece, Spain, Japan, and Italy – also range from historical to media matters.

Mr. Heffner began his broadcasting career in radio (1953) with History In The News on WMCA, New York, and as a radio news reporter at ABC, moving to NBC (1954-59) as Producer-Writer-Moderator of such television series as Man Of The Year, Princeton ’56, All About Men – All About Women and Richard Heffner’s Open Mind. He also served as Director of Public Affairs Programs at WNBC-TV. In 1959 he went to CBS, first as Editorial Consultant to the CBS, Inc. Editorial Board, then as Director of Special Projects for the CBS Television Network.During the 1980’s, he served as Executive Editor of From The Editor’s Desk; most of these weekly news programs are available at thirteen.org/openmind.

In 1961, on leave from CBS, Mr. Heffner played a leading role in the acquisition and activation of Channel Thirteen as New York’s first public broadcasting station, WNET. He was Channel Thirteen’s Founding General Manager until 1963 when he established Richard Heffner Associates, Inc., a broadly-based communications consulting firm that has served such clients as IBM, TIME, Inc., The American Association for the Advancement of Science, the Salk Institute for Biological Sciences, AT&T, American Airlines, Pfizer, Inc., and Sears, Roebuck & Company.

He has also directed such foundation projects as the Twentieth Century Fund’s Commission on Campaign Costs In The Electronic Era (1968-69), and the Ford Foundation’s study of American Television’s Environmental Content (1970-72). In 1986, he served as Chairman of Liberty Conference during America’s Statue of Liberty Centennial.

Mr. Heffner was born in New York City on August 5, 1925. His wife. Dr. Elaine Heffner, is a psychotherapist in private practice. She is a Senior Lecturer of Education in Psychiatry at Weill Cornell University Medical College and was for many years Program Supervisor of the Nursery School Treatment Center at the Payne Whitney Clinic of New York Hospital. She also writes a blog for parents at Good Enough Mothering, and is the author of Mothering, The Emotional Experience of Motherhood After Freud and Feminism. The Heffners have two sons – Daniel, a film producer in California, and Andrew, an attorney and personal development coach in Syracuse, New York – and four grandchildren.

Who Pays for Public TV

Politics and Religion: An American Odyssey

Nine Old (and Young) Men (and Women), Part I

A Bill of Rights for Libraries

Order In the Courts, Part I