About Get the Math

Get the Math combines video and web interactivity to help middle and high school students develop algebraic thinking skills for solving real-world problems. Drawing on conventions of popular reality TV shows, video segments begin with profiles of young professionals, who then pose challenges connected to their jobs to two teams of teens. Viewers are encouraged to try the challenges themselves using interactive tools provided on the Get the Math website before returning to the video to see the teams’ solutions. Students can further explore the same, as well as extended, algebraic concepts through additional interactive challenges on the website.

Video segments and interactive challenges focus on the math in:

In August 2012, MediaKidz Research & Consulting conducted an independent study to assess the effectiveness of Get the Math. Results showed that the program succeeded in prompting more sophisticated algebraic reasoning performance than the students had shown previously. Also, the majority of students asserted they could now name ways that algebra was beneficial in the “real world.” Most teachers rated Get the Math positively in terms of its educational value, appeal/engagement for students, and value/usefulness for teachers. The executive summary of the study is available here.

Awards and honors for Get the Math:

About Get The Math 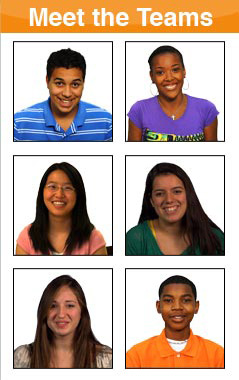