U.S. Army Units Explained: From Squads to Brigades to Corps

Military terms like platoon, company, battalion, brigade may sound familiar, but do you know how many soldiers make up these units, and how they comprise one another? When revisiting the Vietnam era through narratives in the 18-hour PBS series The Vietnam War by Ken Burns and Lynn Novick, it’s useful to understand just how many forces were involved in that war’s battles, down to the number of men. How many U.S. soldiers are in a squad? What groupings do major generals, lieutenant colonels, and captains lead?

If you don’t have a connection to the U.S. Army, the size of Army units can be difficult to grasp and therefore, the human scale of war. While figures are flexible and can vary by war and assignment (armored, artillery, cavalry, ranger), here are some explanations about how the U.S. Army is organized. 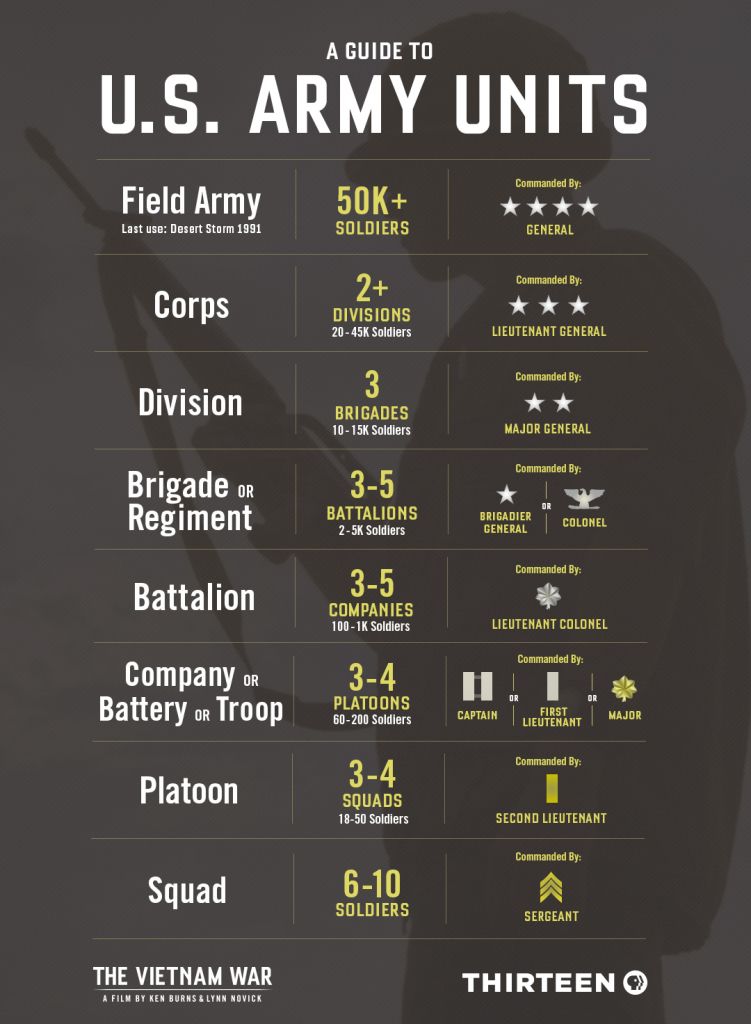 The U.S. Army is made up of its active regular Army and two reserve components—the Army National Guard and the Army Reserve. Since the end of the Vietnam War, the U.S. Army has been all-volunteer— meaning no one is drafted—and as always, everyone receives a salary.

A field army is the U.S. Army’s largest unit structure (50,000 and more soldiers). The last use of a field army was in 1991 during Operation Desert Storm, which took place in Iraq, Kuwait, and outlying areas of Saudi Arabia. A four-star general commands a field army. The five-star rank of general has only been issued in times of war and the last to hold it was General Omar Bradley, who died in 1981. The other five-star generals in the history of the U.S. Army were Generals Marshall, MacArthur, Eisenhower, and Arnold.

The corps is treated as an operational unit of employment by the U.S. Army and can be comprised of 20,000-45,000 soldiers. Corps are commanded by the rank of Lieutenant General (LTG), a three-star general.

The U.S. Army, Vietnam (USARV) controlled all U.S. Army service and logistical units in South Vietnam until May 1972, when it merged with the Military Assistance Command, Vietnam (MACV) to become USARV/MACV Support Command.

The number of modular units in an Army division is flexible and the total number of soldiers is 10,000-15,000. A two-star major general commands a division.

Here are just some examples of divisions that served in the Vietnam War.

The 82nd Airborne Division, an elite infantry division specializing in parachute assault operations, entered Vietnam in 1966. The 101st Airborne Division (“Screaming Eagles”) fought in major battles including the Battle of Hamburger Hill in May 1969. Both airborne divisions were called to duty within the U.S. itself in 1967, to help quell the Detroit riot.

MORE HISTORY: See our Summer of ’69 documentaries or a Summer of 1969 timeline.

Brigades are made up of 2,000-5,000 soldiers, normally split among three to five battalions. The armoured cavalry and ranger forces of this size are called regiments or groups, not brigades. Commanders of brigades or regiments are one-star brigadier generals or colonels. Paratrooper from the 101st Airborne Brigade applying mouth-to-mouth resuscitation to an injured soldier who was airlifted by helicopter to the medical clearing station near Kontum, Vietnam. From The New York Public Library

The 173rd Airborne Brigade was the first major United States Army ground formation deployed in Vietnam, serving from 1965 to 1971 and losing nearly 1,800 soldiers. The 173rd is best known for the Battle of Dak To (1967-68), where along with the Marines, it suffered heavy casualties against the North Vietnamese. When the 173rd returned to the U.S. in 1972, some units became part of the 101st Airborne Division and the rest of the units were inactivated.

A battalion in the U.S. Army is normally made up of three companies and 300 to 1,000 soldiers, but can have up to five companies. An armored or air cavalry unit of similar size is called a squadron.

A company in the U.S. Army is normally made up of three platoons, which means 60 to 200 soldiers, but it can have more. An artillery unit is called a battery and an armored air cavalry is called a troop. Leading a company, battery or troop is a Captain, 1st Lieutenant, or Major.

The company in Vietnam that became infamous for the civilian massacre at My Lai in 1968 was the Charlie Company. The PBS program American Experience documented the history of the company and the massacre.

A 2nd lieutenant commands a platoon, which is comprised of three to four squads (18-50 soldiers).

The squad is a soldier’s most intimate group, consisting of six to ten soldiers. A squad is commanded by a staff sergeant or sergeant.

The Vietnam War, the Emmy-nominated, 10-part, 18-hour documentary film series by Ken Burns and Lynn Novick, can be streamed on demand by members of PBS stations, in addition to all the films of The Ken Burns Collection. An immersive 360-degree narrative, the series tells the epic story of the Vietnam War as it has never before been told on film.

For stories about Vietnam veterans, stream “Saved in Vietnam” from We’ll Meet Again Season 2, produced and hosted by journalist Ann Curry. In the episode, Curry helps two Vietnam veterans search for the heroes who saved them. An Army officer searches for the helicopter pilot who rescued him, while another soldier wants to reconnect with the surgeon who saved his leg from amputation.

In May 2022, PBS station THIRTEEN will rebroadcast a series focused on personal experiences in World War II: My Grandparents War, which streams on-demand for PBS station members. British Hollywood actors – grandchildren of men and women who fought and served in World War II – re-trace the footsteps of their grandparents and learn how World War II changed the lives of their families – and the world. See broadcast schedule.

READ NEXT
Historic Gems in Brooklyn