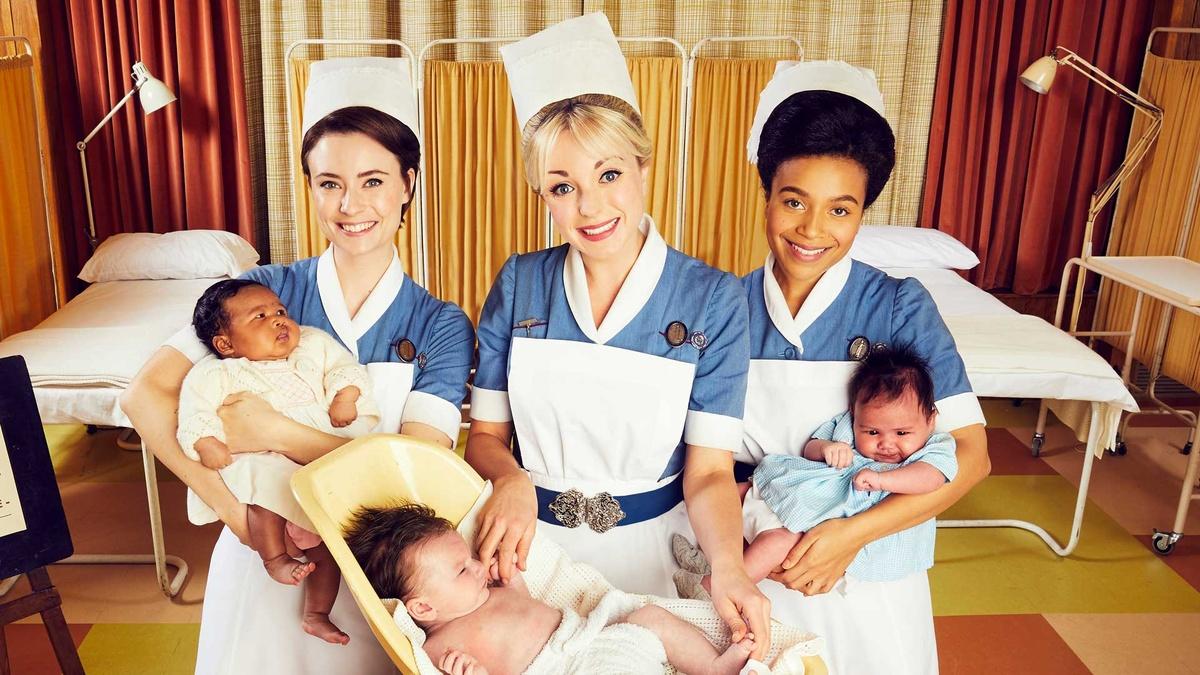 It’s springtime in Poplar when Season 8 of Call the Midwife premieres on Sunday, March 31, opening in March 1964.

To deliver you back to this quickly changing world in London, here’s a short recap of events in 1964 that could have been on the minds of midwives and religious sisters. Read our weekly episode recaps here.

Babies of the British Monarchy In Call the Midwife Season 8, Episode 1, the birth of the Queen’s baby boy is celebrated.

Like everyone else in Great Britain, the midwives are anticipating the birth of Queen Elizabeth II’s fourth child, even if she won’t be availing herself of their services. Prince Edward will arrive on March 10, 1964.

Queen Elizabeth’s younger sister, the “rebel princess” Margaret, will give birth to Sarah on May 1, 1964.

Decades ahead of MTV, the BBC’s hip new weekly music show – Top of the Pops – launched on January 1, 1964 to reveal what the kids were listening to: the week’s best-selling artists. The very first musicians featured:

These award-winning films released in 1964 could have made for a fun girls’ night out for the Nonnatus House residents.

Women in Health and Medicine A midwife who worked in London’s East End Maternity Hospital in the early 1960s describes her 12-hour shifts, six days a week, in this interview with the Express. Her service included house calls to impoverished families who lived in conditions similar to Victorian times: no electricity or running water, and vermin!

While district nurses and midwives were familiar sights in the United Kingdom in the early 1960s, fewer than 70 nurse-midwives were in practice in the U.S., according to Our Bodies Ourselves.

British chemist Dorothy Crowfoot Hodgkin was awarded the Nobel Prize in Chemistry in 1964 for confirming the molecular structure of vitamin B12, which is vital to red blood cell formation and neurological functions (older persons, vegetarians and vegans are at risk of having B12 deficiency). She developed X-ray crystallography to reveal the structures of biochemical substances, including penicillin.

The Labour Party (no relation to the women served by the midwives) takes power in October’s general election in the U.K., ending 13 years of Conservative government. Winston Churchill, who led England as Prime Minister during World War II, retires as a Member of Parliament after 63 years.

Britain and France sign an agreement to build a tunnel between their countries and aim to complete it by 1969. It takes until 1994 to open the Channel Tunnel to traffic, and until 2013 to have an international crime series center on it! (Have you seen the PBS series The Tunnel?)

Britain abolishes the death penalty in November 1964, which will be effective at the end of 1965.

To describe the displacement of people in working class London neighborhoods like Notting Hill and Islington, British sociologist Ruth Glass coins the term “gentrification” in her book London: Aspects of Change. Two characters we met in the 2018 Holiday Special of Call the Midwife will become recurring characters in Season 8. Plucky Sister Hilda (Fenella Woolgar from Home Fires – Masterpiece) and the saucer-eyed, young postulant Frances (Ella Bruccoleri) move from the Mother House to Nonnatus House. A note for those new to Call the Midwife: Nonnatus House is named for Raymund Nonnatus, the patron saint of pregnant women, midwives, and children. The Nuns of the Order of St. Raymund Nonnatus are part of the Anglican communion, which was founded in 1867 within the Church of England.

THIRTEEN will recap each of the eight episodes of Call the Midwife Season 8 (find current and past season recaps, here). Join the conversation on social with the hashtag #MidwifePBS.

READ NEXT
The Real Housewives of Jamestown